Squirrels All Over The Country Are Vandalizing Halloween Pumpkins

Squirrels All Over The Country Are Vandalizing Halloween Pumpkins | Squirrel Control

Spotting a wild animal while outdoors may be cause for alarm in many cases, but not when it comes to squirrels. Squirrels are so abundant in the wild that people hardly take the time to notice them, and squirrels typically mind their own business without getting involved with humans. Luckily, it is very rare for a squirrel to be carrying rabies, and it is next to impossible for a human to contract rabies from the bite of an infected squirrel. According to the Centers for Disease Control and Prevention, squirrels have never been known to transmit rabies to humans in the United States. In fact, squirrel attacks on humans are so incredibly rare in the US that the CDC does not even bother keeping data on such incidents. When it comes to vandalism, raccoons and skunks are often found rooting through trash or possibly causing structural damages to homes, but here again, squirrels are not usually behind property damages caused by wildlife. However, the fall is a special time of year for squirrels, as they seem to have a taste for the decorative Halloween pumpkins that are displayed on people’s doorsteps. This seems to be especially true for this particular fall season, as residents from all regions of America have been complaining more than usual about squirrels destroying and sometimes eating their Halloween decorations. 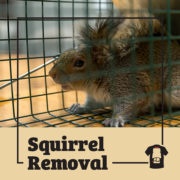 The National Wildlife Federation recommends that people allow wild animals to chow down on their pumpkins after Halloween passes. Unwanted pumpkins should be cut into small pieces and left outdoors for hungry animals, but this year, squirrels could not wait until the Halloween celebrations passed. Numerous residents described mischievous squirrels that sat on top of pumpkins while slowly eating them piece-by-piece, and many trick-or-treaters were driven away from homes by the presence of hungry squirrels devouring pumpkins on doorsteps. So how normal is this behavior? Well, according to Steven Sullivan, the director of the Hefner Museum of Natural History, squirrels only start eating pumpkins in front of homes when they are desperate for food. An increase in pumpkin-eating among squirrels could indicate that a particular region’s trees have not produced a sufficient amount of seeds and nuts for squirrels to feed on. In this case, a region’s squirrel-life will destroy fall fruits in an effort to access the seeds contained within. Many people have taken photos of squirrels destroying and feasting on their pumpkins, and many of these photos are being posted on social media sites. In addition to squirrels, other wild animals like elephants, chimpanzees, camels and goats also seek out pumpkins as a tasty  source of food.

Did you notice an increase in the amount of squirrels in your front yard after placing your pumpkin outside this year?