Native Americans Considered The Skunk To Have Tribal, Religious, And Medicinal Significance 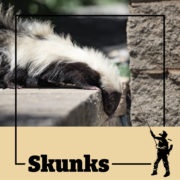 There exists several wild animals that are commonly found rummaging through garbage, hiding out in garages, destroying gardens and causing a variety of other sorts of mischief within or near people’s homes. These wild animals include possums, raccoons and rats, just to name a few. Although finding your trash strewn around your lawn as a result of repeated raccoon visits during the night would become a source of annoyance for most people, there is no wild animal that homeowners dread more than skunks. Skunks are particularly problematic for homeowners as they emit a foul smelling substance that can linger for weeks or longer. As far as modern homeowners are concerned, skunks have no redeeming qualities, but native Americans, who also regarded skunks as common pests, had a relatively less negative and more complicated attitude toward the odorous critters.

The word “skunk”, like many other animal names in North America, is of native American origin. The fact that skunks were described as monsters in several native American legends suggests that the critters were considered as undesirable then as they are today. It goes without saying that a skunk’s pungently foul odor played a big part in the distaste with which they were viewed by native Americans. One native American legend claims that skunk spray used to be fatal to humans, but either a native American hero or a group of righteous animals defeated the skunk in battle, which resulted in skunk spray becoming merely annoying as opposed to deadly. Many tribes avoided capturing and consuming skunk meat, as they believed skunk flesh to be poisonous, but a few tribes did indulge in skunk hunting for sustenance. It was also considered bad luck in native American lore to encounter a skunk in one’s path, and some tribes associated skunks with evil sorcery. However, many native American tribes located in the southeast region of America, such as Muscogee Creek, revered skunks for their readiness to defend themselves. This reverence is well expressed in the many native American legends that describe skunks as righteously defending themselves and their families against evil animals. The Cherokee people considered a skunk’s odor to be of value for fighting disease, which is why many southeast tribes hung a skunk from atop doorways when disease outbreaks occurred. Later on, native American tribes sold “skunk oil,” which is rendered skunk fat, to colonists as a type of topical medicine.

Would you be willing to apply “skunk oil” to your skin?