It is commonly assumed that snakes, black widows, brown recluses, bees, wasps, scorpions and other types of venomous animals are responsible for the greatest amount of fatal wildlife attacks on humans. However, according to experts, the majority of fatal wildlife attacks are perpetrated by non-venomous animals. That being said, it would be a mistake to assume that predatory animals, such as mountain lions, wolves and bears, are the most deadly wild animals. In reality, farm animals are responsible for the greatest amount of fatalities, and these fatalities largely result from accidents suffered by agricultural workers. When considering the human and animal habitats that overlap, raccoons cause more human deaths than skunks, possums, and rats. Woodchucks may not kill many people, but they can be considered dangerous due to the high probability that the ones you encounter in the wild carry and can transmit rabies to humans. According to the Centers for Disease Control and Prevention, woodchucks accounted for 86 percent of rodent-transmitted rabies cases over a ten year period from 1990 to 2000. Another animal worth considering for the degree of danger they pose to humans are squirrels. The CDC does not consider squirrels to be a serious threat to human safety, but anecdotal reports and historical records say otherwise. 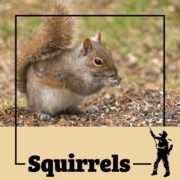 A few years ago, one single squirrel menace attacked and bit eight people in California. Shortly after these attacks, another squirrel attacked and injured three elderly people in a retirement home in Florida. Squirrel attacks are also well documented in newspaper archives. For example, a New York Times article from 1921 described how a grey squirrel that was “believed to have gone mad” nearly attacked a group of schoolchildren after having bitten the hand of a man who was attempting to give the squirrel a nut. The squirrel also attacked a woman who threw a milk bottle at it in an effort to prevent further attacks, but the squirrel was not deterred by this defensive act and proceeded to attack her again before it was shot by a next door neighbor. Another newspaper article from 1878 described one squirrel’s effort to attack a farmer after it had already attacked and mutilated the face of a farmhand. Although squirrel attacks have been known to occur, it would be irrational to live in constant fear of them, but you may want to think twice before feeding one.

Have you ever been startled by a squirrel that approached you more closely than normal?